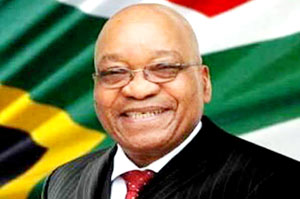 Capte Town, South Africa's former President Jacob Zuma has been charged with corruption linked to a 1990s arms deal, says a BBC News report on Friday. After the 75-year-old's 15-minute appearance at the High Court in Durban on Friday morning, the case was adjourned until 8 June.He faces 16 counts of corruption, racketeering, fraud and money laundering, which dogged his presidency and were reinstated in 2016. Mr Zuma, who was forced out of office in February, denies any wrongdoing. His supporters descended on the city to rally for him, while his critics think court action is long overdue. After the hearing, Mr Zuma addressed the crowds, who had come to stand alongside him at the court in his home province. "Some people are acting like I have been convicted, I am innocent until proven guilty," he said.He then led them in song and dance. Mr Zuma and his legal team insist the charges are trumped up and politically motivated.Mr Zuma was deputy president at the time of the arms deal in 1999. He is accused of accepting bribes from French arms firm Thales via his financial adviser at the time.The adviser, Schabir Shaikh, was found guilty of trying to solicit the bribes and was jailed in 2005. The case against Mr Zuma was dropped shortly before he ran for president in 2009. On Friday, Downtown Durban was a hive of activity as the province's beloved Jacob Zuma once again stepped into the spotlight. Some of the roads around the grand court building had been cordoned off, while a large stage was erected by Mr Zuma's supporters a few metres from the courthouse. The last time Mr Zuma was in court for a trial was more than 10 years ago on rape charges -- he denied the allegations and the case was later dropped. Back then, thousands came to support him including members of his own African National Congress (ANC) party.