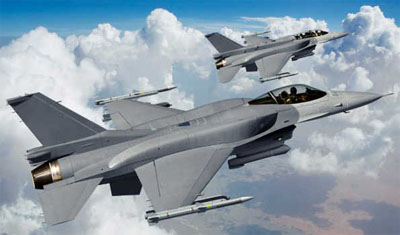 Agencies, New Delhi Pakistan has yet again walked into a vicious cycle created by itself vis-a-vis its use of F-16 fighter jets against India during February 27 misadventure and now an US investigation is on. Official sources in Delhi said they are "sure" that Washington was carrying out a thorough investigation into the use of the US-manufactured fighter as well as the missile onboard it in the offensive operation against India. "Sab kucch wahan haen (Everything is with them)," a key government source said here. Things like serial number, the name of the company .....everything is with the US. On this backdrop, sources said New Delhi has 'given proof' to Washington about the use of F-16 fighters. "The fact that Pakistan has to resort to tactics and alleging that the missile came from a Taiwanese inventory and the Taiwan government clearly putting a denial simply indicate the desperation that Pakistan is facing," the source said. Last week, senior Air Force officials in Delhi displayed 'remains' of a United States-made missile which could only have been fired from an F-16. The issue has triggered a major row as the US-delivered jets can reportedly only be used against terrorists, not against other countries. Debates surfaced whether Pakistan willfully violated the end user clauses by putting F-16 jets in use during February 27 misadventure it wanted to strike at military installations in northern sector. Pakistani agencies and authorities apparently wanted to look for an escape route and said the wreckage could have been part of a missile sold by the U.S. to Taiwan. In fact, a Pakistan daily also reported - “How the wreckage of a missile sold to Taiwan ended up in the hands of an Indian military air vice marshal is something only New Delhi can explain". The reference was to Air Vice Marshal RGK Kapoor statement that Pakistan has no other plane other than the F-16 to use the AIM-120 Advanced Medium-Range Air-to-Air Missile (AMRAAM) missile beyond visual range air-to-air missile. But the Pakistan's motives did not run for long and the bluff was called as the Taiwan Air Force quickly did their "checks and ascertained" that the identification numbers reported by Pakistan newspaper did not match any of its missiles. In fact, a section of Taiwanese media was also annoyed with such allegation directed against Taiwan and said the allegation was like a case of Taiwan getting hit by a bullet while lying down. The US administration has said that America is seeking more information from Pakistan on the potential misuse of American-made F-16 fighter jets by it against India in violation of the end-user agreement. Commenting on the development on the issue, an Indian official said: "We must give the US some time, they must be conducting the investigation".