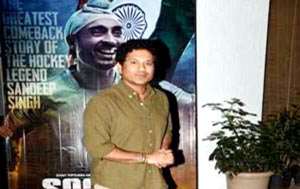 New Delhi, Sachin Tendulkar attended the special screening of hockey legend Sandeep Singh's biopic 'Soorma' starring Diljit Dosanjh. Ahead of the film's release, makers of 'Soorma' organised a special screening for Sachin Tendulkar in Mumbai to showcase the biopic of India's ace hockey player Sandeep Singh. Mr Tendular said, "the movie seems inspiring. We all followed Hockey but something like this had happened to Sandeep I was not aware of honestly. This is extremely inspiring not just for a sportsman but generally for everyone. The story portrays the 'not giving up' attitude and spirit of a sportsman." Makers took to Twitter to share the video of Sachin Tendulkar saying, "The #Soorma of cricket - @sachin_rt couldn't hold his excitement after watching #Soorma! Thank you so much master blaster for all the love! @diljitdosanjh @taapsee @Imangadbedi @flickersingh @SnehaRajani @IChitrangda @thecsfilms @shaadesh #DeepakSingh". Director Shaad Ali too attended the special screening of 'Soorma' and posed for the shutterbugs with the God of cricket. Twelve years ago, Sandeep Singh was shot with a bullet while he was traveling in the train, after which the hockey player was paralysed for two years. But his determination and love for the game brought him back and he won several medals for India. The film has been shot in his hometown Shahabad to capture the real essence of his struggle and the journey to become the hockey legend. 'Soorma' features Diljit Dosanjh essaying the role of Sandeep Singh along with Taapsee Pannu and Angad Bedi in the pivotal roles.