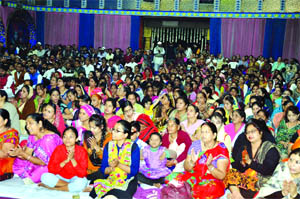 Chronicle Reporter, Bhopal On the fourth day of Shri Sai Amrit Katha, Sumit Pondha ‘Bhaiji’ said Sai had told that leprosy does not spread by touching and today the doctors have also authenticated this. He said it is our endeavour to serve the society while trying to follow the path of Baba and in this direction the leprosy patients from the Mahatma Gandhi Leprosy Ashram have been invited. Bhaiji spoke about the Vedas and the philosophy of Sai and explained the scientific importance of Makar Sankranti. Bhaiji gave very melodious presentation of Sai’s bhajans and Dwarika Mai. The audience was held spellbound by the bhajans. On Monday on the last day of the Katha, the organizing committee has organized an organ donation camp.