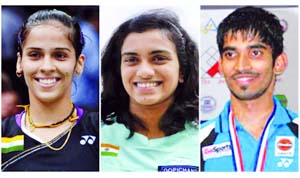 Agencies, Birmingham India shuttler Saina Nehwal crashed out while Kidambi Srikanth and PV Sindhu advanced into the second round of the All England Open Badminton Championships in Birmingham on Wednesday. Nehwal crashed out of the Championship after losing the contest in straight games 14-21, 18-21 in 38 minutes to defending champion, Tai Tzu Ying of Taiwan.Saina initially showed some fight before Tai won seven consecutive points in the opening game 21-14. In the second round, she again started positively extending her lead to 16-1, but Tai again made a strong comeback and ensured she didn’t allow the game to slip away, winning 21-18. In another women’s singles, Rio Olympic silver medallist P.V. Sindhu brought some good news for the Indian fans as she entered round two of the championship after beating Pornpawee Chochuwong of Thailand 20-22, 21-17, 21-9. Sindhu conceded the first game after a tough fight but fought back strongly to make a comeback and win the game. Meanwhile, in men’s singles, Kidambi Srikanth also advanced to the second round of the event after beating Brice Leverdez of France in a hard-fought game.Srikanth emerged victorious with 7-21, 21-14, 22-20 in the match, which lasted for about an hour.