Saint motivates lakhs in MP to give up liquor 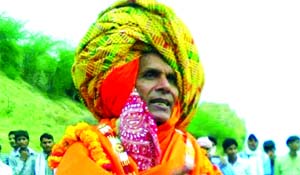 Prakash Pandey, Bhopal A single message from the saint has motivated lakhs of families in Madhya Pradesh and Rajasthan to give up liquor. Earlier these families used to spend lot of money on liquor in family programmes. Besides large number of families have decided to gie up the tradition of organizing ‘mrityu bhoj’ (feast given after the death of a person). The name of Hari Giriji Maharaj, leading the life of a saint for the last 20 years in the ravines of Chambal, has become synonymous with faith for people from Gwalior division to Jaipur. First he administered pledge to members of Gurjar community to keep away from liquor. The voice of the saint had such magical effect that thousands of Gurjars vowed never to touch wine. Large number of people visited Hari Giriji Maharaj’s ashram and expressed their vow to give up liquor. Today large numbers of people in Bhind, Morena, Datia, Gwalior, Bharatpur, Kota and Jaipur have given up liquor. There is peace in houses where once heinous crimes took place due to liquor consumption. Significantly today members of other communities are also influenced by Saintji and keeping away from liquor. Many people have also pledged to give up customs like mrityu bhoj. In the last six months no Gurjar family has organized mrityu bhoj. Our community has given up liquor. Now other communities are also trying to follow this. -Lokendra Gurjar, General Secretary, AI Yuva Gurjar Mahasabha We are in Bhopal. But the effect of Saintji is such that we have given up liquor. Now no one in our family touches wine. -Ramsingh Gurjar, Bhopal