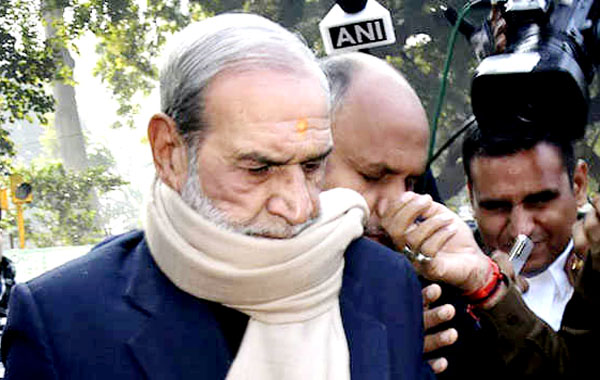 New Delhi, The Delhi High Court on Friday dismissed the plea of former Congress leader Sajjan Kumar who was convicted and sentenced to life imprisonment in1984 anti-Sikh riots case on December 17, day after he had moved an application before the Court and sought 30 days’ time to surrender. The Court had asked him to surrender by December 31 but he had on Thursday moved it seeking time till the end of January. Kumar's lawyer had said they need some more time to file an appeal before the Supreme Court challenging the high court's verdict in which he was sentenced to life imprisonment. Pertaining to the case, earlier the Trial court found former Congress councillor Balwan Khokhar, Retired Naval officer Captain Bhagmal, Girdhari Lal and two others guilty for the murder of five members of a family in Raj Nagar area of Delhi Cantonment on November 1, 1984 after the assassination of the then Prime Minister of Smt. Indira Gandhi. The Trial court had then acquitted Sajjan Kumar but awarded the life term to Khokhar, Bhagmal and Lal and a three-year jail term to two Former MLA Mahender Yadav and Kishan Khokhar. The convicted persons had challenged their conviction and sentencing order of the Trial court in the month of May 2013. On November 16 Cham Kaur a prosecution witness submitted before the court that she had seen Kumar allegedly addressing the crowd in Delhi's Sultanpuri area in 1984 that Sikhs had killed her mother. She further named other persons who were shot dead on the same date by the mob. Another prosecution witness Sheela Kaur had also identified Kumar as the one who had instigated the mob in Sultanpuri area. Delhi High Court division bench Justices S Muralidhar and Vinod Goel after hearing the final arguments in the appeals sentenced to Kumar with life imprisonment on December, 17 and order to surrender before the court by December 31, 2018.