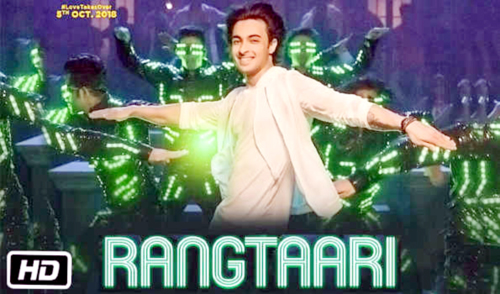 New Delhi, Salman Khan shared the new song from Loveratri titled ‘Rangtaari’ on Wednesday. Sharing the video, Salman said,"Watch the amazing #Rangtaari song, Maine toh picture produce ki hai aur mujhe to maza aa gaya dekh ke.. aap bhi batao if u do like the song.” Aayush Sharma had unveiled the teaser of the song and the festive beats had created excitement since then.The song has foot-tapping beats and vocals, Aayush Sharma's dance moves do complete justice to this groovy number. Yo Yo Honey Singh once again proves his versatility as his rap enhances this energetic number.Composed by Tanishk Bagchi and penned by Shabbir Ahmed "Rangtaari" is the perfect festive number The trailer had earlier set the mood right with the foot-tapping music and colorful backdrop of the festive season. With Garba being an essential factor in the story, both Aayush and Warina took extensive lessons to learn the dance form. The leading pair Aayush and Warina have been piquing the interest of the audience with videos and pictures from the Garba training. Written by Niren Bhatt, 'Loveratri' is directed by Abhiraj Minawala who will also be making his directorial debut with the film. The romantic drama will mark the next venture of Salman Khan Films.