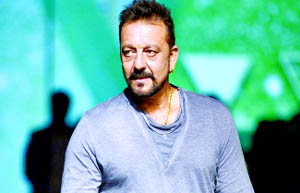 Marking Marty’s day Bollywood actor Sanjay Dutt Gave a shout out to the father of the nation MG The actor who is synonymous with the term Gandhigiri courtesy his blockbuster hit Lage Raho Munna Bhai, remembered MG on the occassion of MD that is celebrated every year on 30th January. Sanjay created a frenzy as he revisited Gandhiji’s philosophy’s with his 2006’s release Lage Raho Munna Bhai. Reprising the philosophy and the ideology of MG Sanjay Dutt’s LRMB struck cords with the audience and became hugely popular amongst the masses. The Raj Kumar Hirani directorial is stouted to be a classic and is regarded as one of the most recalled performances of Sanjay Dutt. Giving a shoutout to Bapu a la Munna Bhai Sanjay Dutt wrote,”Bole toh... Bande mai tha dum.. Vande Mataram! Remembering our very own Father of the Nation on Martyr’s Day. His thoughts and ideologies will stay with us forever. #MahatmaGandhi” In Lage Raho Munna Bhai Dutt’s character follows footsteps of Mahatma Gandhi and takes to Gandhigiri. On the work front, Sanjay is shooting for Tigmanshu Dhulia’s Sahib Biwi and Gangster 3. While Sanjy’s biopic will be releasing on 29th June 2018.