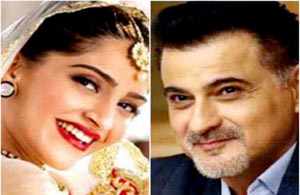 New Delhi, Actor Sanjay Kapoor is all set to play Sonam Kapoor's father in the upcoming movie 'The Zoya Factor'. Sonam, who will be paired opposite Dulquer Salmaan for the first time, plays the role of an advertising agency executive in 'The Zoya Factor'. The film is expected to feature Dulquer in the role of a cricketer and is based on the novel by the same name. On the other hand, Sanjay is super excited to play the role of Sonam aka 'Zoya's father.Revealing about how he received a call for the film when he was in New York, Sanjay expressed his happiness over being a part of the project. "After getting a call from the producer, I also received another call from director Abhishek Sharma who briefed me about the story and the plot,' Sanjay said.Calling it a perfect opportunity, Sanjay Kapoor is glad that he got yet another chance to work with his family. Before this, Sanjay worked with his brother Anil Kapoor and nephew Arjun Kapoor in 'Mubarakan'. While Sonam Kapoor will also be seen next essaying the role of the reel daughter of her real life father Anil Kapoor in 'Ek Ladki Ko Dekha Toh Aisa Laga'. 'The Zoya Factor', is the book written by Anuja Chauhan talks about a simple independent girl who suddenly changes the fate of the cricket team.