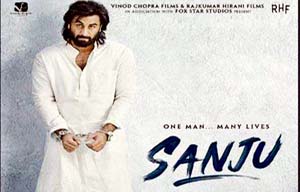 New Delhi, Rajkumar Hirani's 'Sanju' creates history by minting Rs 46.71 crore on day three taking the grand total to a whopping Rs 120.06 crore at the box office. By becoming the highest opener of 2018 to marking the highest Sunday ever for a Hindi film, 'Sanju' has shattered all records at the domestic box office.  'Sanju' has been garnering immense love and appreciation from audience across the globe. Rajkumar Hirani's cinematic excellence to make a film on Sanjay Dutt's colourful life journey has got the film humongous response also marking to be Rajkumar Hirani's highest too. Written and directed by Rajkumar Hirani, the film will also stars an ensemble cast in addition to Ranbir Kapoor which includes Paresh Rawal, Manisha Koirala, Vicky Kaushal, Sonam Kapoor and Dia Mirza amongst others. Produced by Vinod Chopra Films and Rajkumar Hirani Films in association with Fox Star Studios. 'Sanju' is going strong at the box office.