‘Sanju’ Teaser: It’s going to be epic and will smash the Box-Office! 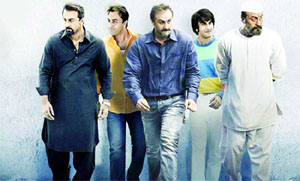 After such a long wait and lots of suspense around the film, the first teaser and title of Sanjay Dutt’s biopic have been revealed. The much-awaited biopic has been titled as ‘Sanju’. The tagline of the film is One Man... Many Lives. Few lives in our times are as dramatic and enigmatic as the saga of Sanjay Dutt. Coming from a family of cinema legends, he himself became a film star, and then saw dizzying heights and darkest depths: adulation of diehard fans, unending battles with various addictions, brushes with the underworld, prison terms, loss of loved ones, and the haunting speculation that he might or might not be a terrorist. Sanju is in turns a hilarious and heartbreaking exploration of one man’s battle against his own wild self and the formidable external forces trying to crush him. It depicts the journey of a man through everything that life can throw at him. Some true stories leave you thinking `did this really happen?` This is one such unbelievable story that happens to be true. . Actor Ranbir Kapoor who is portraying the character of legendary Bollywood actor Sanjay Dutt has done a great job and it is very difficult to differentiate between these two that who is the real Sanjay Dutt. Ranbir has done tremendous job depicting the character of Sanjay Dutt with such a finesse. Starring Ranbir Kapoor, Paresh Rawal, Manisha Koirala, Anushka Sharma, Sonam Kapoor, Dia Mirza, Vicky Kaushal, Jim Sarbh and Boman Irani, the film is produced by Vinod Chopra Films and Rajkumar Hirani Films in association with Fox Star Studios.