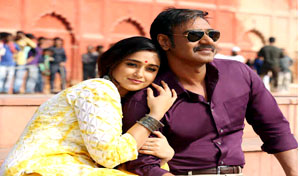 New Delhi, The golden trio of Nusrat Fateh Ali Khan, Ajay Devgn and Ileana D'cruz, which gave the hit song 'Mere Rashke Qamar' last year, is yet again here to make the audiences swoon over their music with the romantic number 'Sanu Ek Pal' in their upcoming movie 'Raid'. The song will be released on Monday.Originally sung by Nusrat Fateh Ali Khan, the song is recreated by composer Tanishk Bagchi, penned by Manoj Muntashir and sung by Rahat Fateh Ali Khan. The song was earlier selected for T Series' other home production, however, when Ajay Devgn heard the recreated song, he insisted it to be a part of 'Raid,' based on . Bhushan Kumar, hence decided to include this timeless melody in 'Raid'. The song beautifully captures the emotions of Ajay and Ileana's characters. Their chemistry is remarkable throughout the song.Directed by Raj Kumar Gupta,'Raid' is an upcoming crime drama film written by Ritesh Shah. It features Ajay Devgn, Ileana D'Cruz and Saurabh Shukla. The movie is based on Union Minister of State for Electronics and Information Technology, Culture, and Tourism Alphons Kannanthanam, an IAS officer of 1979 batch. The principal photography of the film commenced in Lucknow and Raebareli in September 2017. It will release on March 16.