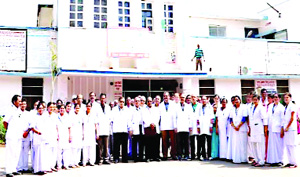 Chronicle Reporter, Bhopal Satna district hospital has become the first hospital in Madhya Pradesh to have acquired National Quality Assurance Standard (NQAS) certification. NQAS is international quality certified standard under which standards have been made for states health institutes. Under this the hospital will be provided Rs 40 lakh as incentive every year by the Centre. Satna district hospital leads in Kayakalp Abhiyan also and is acquiring awards for the last three years. Public Health and Family Welfare Minister Shri Rustum Singh has congratulated the department and Satna district hospital for the achievement. Satna has bagged the NQAS certification while making maximum utilization of its resources in Sardar Vallabh Bhai Patel district hospital. About 3 lakh 64 thousand 286 patients availed benefits this year in the hospital OPD while 52 thousand 966 patients availed benefits of health facilities in IOPD. Besides 4 lakh 33 thousand 615 lab investigation, 10 thousand 505 deliveries, 8 thousand 777 major surgeries were conducted under report period. The hospital acquired NQAS certificate by acquiring 77 marks against 70 per cent marks needed for certification. The external assessment of the hospital was carried out by a 3-member team of the Government of India in three days. District hospital has also become the first district in the state in statutory compliance.