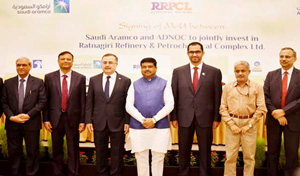 New Delhi,Saudi Aramco and ADNOC signed an MoU to jointly develop and build an integrated refinery and petrochemicals complex at Ratnagiri in Maharashtra, a statement here said. The project will be implemented by Ratnagiri Refinery & Petrochemicals Ltd. (RRPCL).The MoU was signed between Saudi Aramco President and CEO, Amin H. Nasser and H.E.Dr. Sultan Ahmed Al Jaber, UAE Minister of State & ADNOC Group CEO. The signing was witnessed by His Highness Sheikh Abdullah bin Zayed bin Sultan Al Nahyan, UAE Minister of Foreign Affairs and International Cooperation,who is on an official visit to India, and Dharmendra Pradhan, Minister of Petroleum and Natural Gas & Skill Development & Entrepreneurship. Earlier, Saudi Aramco had joined the project by signing an MoU with the Indian consortium on 11th April 2018 on the sidelines of the16 International Energy Forum Ministerial. Saudi Aramco also sought to include another strategic partner to co-invest in the project as an overseas investor. RRPCL which is promoted by a consortium of India PSUs consisting of IOCL, BPCL and HPCLwill now have Saudi Aramco & ADNOC as overseas strategic partners. The project will be set up as a 50:50 joint partnership (50:50) between the consortium from India and Saudi Aramco and ADNOC. This will be single largest overseas investment in the Indian refining sector. "The investment by Saudi ARAMCO and ADNOC in the $ 44 billion project will be the highest ever overseas investment in the Indian refining sector. The significance, however, goes much beyond FDI. It is a strategic partnership between India, Saudi Arabia and the UAE which is symbolised by the MoU. The strategic partnership brings together crude supply, resources, technologies, experience and expertise of these multiple oil companies with an established commercial presence around the world," said Mr Pradhan.