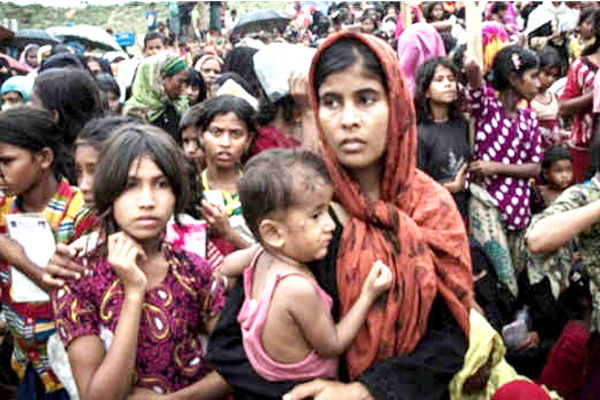 New Delhi, Senior Supreme Court lawyer, Prashant Bhushan, on Monday submitted to the Supreme Court that Rohingyas were being subjected to discrimination in India. Additional Solicitor General (ASG), Tushar Mehta, senior lawyer appearing for the central government, objected to the petitioner's lawyer, Prashant Bhushan, and said, this was wrong. "No such kind of discrimination is being done to them. Everyone is getting equal benefits," the ASG told the apex court three-judge bench, headed by Chief Justice of India (CJI) Dipak Misra and also comprising Justices AM Khanwilkar and DY Chandrachud. The top court on Monday asked the central government to file a comprehensive and detailed data within four weeks as to how many Rohingya refugees were staying in Mewat and Faridabad camps and what kind of basic necessities they were being provided with. "File a detailed and comprehensive data on Rohingya refugees which are staying in Mewat and Faridabad. What are the basic amenities they are getting," the three-judge bench of the apex court said, and fixed the matter for further hearing on May 9. A number of petitioners, including that of Mohammed Sallimullah, had knocked the doors of the apex court seeking its intervention and direction not to deport them to Myanmar. "If they would be deported, they may be killed in Myanmar," he had said. Senior Supreme Court lawyer and noted legal expert, Bhushan, who was appearing for the petitioner, Sallimullah in the matter had pleaded to the apex court for taking a humane approach and not to deport them to Myanmar till their petition was being heard "properly and in great detail". Bhushan had submitted to the apex court that those Rohingyas who wanted to come to India should not be pushed back by the Border Security Force (BSF) personnel. The force is allegedly using chilli powder to push them. Mr Bhushan had told the top court that this kind of alleged act was gross violation of the international conventions on refugees. Bhushan had also submitted to the apex court that the Indian government must be prevented from stopping more Rohingyas entering India because of persecution faced in Myanmar.