Scout-Guide are symbol of discipline and sense of service- Governor Smt. Patel 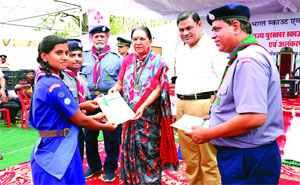 Chronicle Reporter, Bhopal Governor Smt. Anandiben Patel said today at the 25th Scout-Guide rally and Investiture Ceremony that the success of government’s welfare schemes and programmes are assured with the support of Scout-Guide. Scout-Guide are symbols of disciple, hard work, dedication and dedication towards service. Governor Smt. Patel said that the Scout movement is the world’s biggest academic movement of youths in uniform. In this the youth are playing a creative role for world peace, brotherhood and harmony. The door to this organization is open to all sections of the society irrespective of caste discrimination. She said that it is the responsibility of Scout-Guide to imbibe Indian culture and civilization and explain their colleagues about the importance of social service. Energy Minister and State Commissioner of Scout Guide Paras Jain said on the occasion that over 10 thousand Scout –Guide gave commendable contribution during the Simhastha held in state. He said that Scout-Guide are given Yoga training also which is must for health. Jain urged the Governor that instead of entrusting the Scout-Guide building to Airport Authority, government should make the same amount of space for construction of Scout- Guide building. Chairperson of Women;s Commission Smt. Lata Wankhede, former MLA Guttu Bhaiyya, Secretary Education Department Ashok Bhargav, Commissioner Scout Prakash Sisodia, Commissioner Guide Smt. Chandrakanta and State Secretary Scout Guide Alok Khare were present on the occasion.