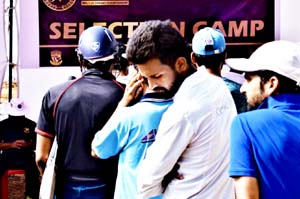 Chronicle Reporter, Bhopal, Players continue to arrive in large number for the trials of the selection for teams playing for Madhya Premier League Cricket Championship. The tourney will be played from Bab-e-Ali Grounds from June 16. The selection committee tested the players in various disciplines including barring, bowling, fielding and wicket keeping. Many budding players impressed with their talent. The selection trials are being organized in the morning and evening sessions. The organizing committee has given a new look to the Bab-e-Ali Grpunds. Sixty feet tall electricity poles are being fitted. After the final trials, the players will be included in the teams for Bhopal Hunters, Indore Rajwada, Gwalior Maharaja, Sagar Kings, Rewa Tigers and Jabalpur Rocks. There is great entnusiasm among the locals for the championship.