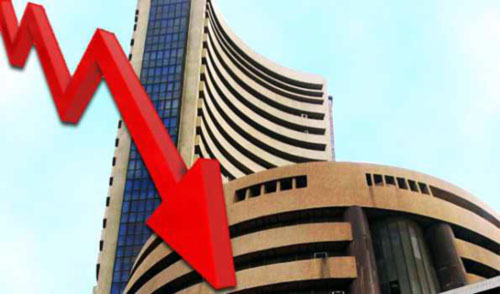 Mumbai, The benchmark index of Bombay Stock Exchange on Friday crashed by 689.60 points below 36K to 35,742.07 nearly a two-week-low following heavy selling from domestic institutions and investors across all sectors, mainly taking cues from weak global markets after the US Fed Reserve hiked interest rates, amid sliding rupee and strong crude prices. The Nifty of National Stock Exchange (NSE) too dropped by 197.70 points to 10,754.00. The day opened on a positive note, up by 18 points to 36,449.27 in early trade, it added another gain of 52 points to 36,483.49 day high. Later, it lost nearly 737 points to 35,694.74 days low before closing at 35,742.07, sliding by 689.60 points from its last close. The Nifty recorded day high and low at 10,963.65 and 10,738.65 respectively.The S&P BSE Mid-Cap index lost 1.10 pc. The S&P BSE Small-Cap index fell 1 pc. The sectoral indices that badly hit were IT, Auto, Consumer Durable, Telecom down more than 2 per cent.Similarly, Capital Goods and Realty too fell by more than one per cent. In scrips, Wirpo was the major loser, down by more than 4 per cent followed by Adani Ports, Maruti Suzuki, Infosys and TCS too eased by more than three per cent. The market breadth, indicating the overall health of the market, was weak. On the BSE, 901 shares rose and 1691 shares fell. A total of 151 shares were unchanged.Overseas, European stocks were lower Friday as automakers to telecoms fell after renewed concerns about U.S.-China tensions spooked investors. Most Asian stocks declined. US stocks were also in red on Thursday with investors rattling after the Federal Reserve's interest-rate policy and fresh concerns of a partial government shutdown undercut buying appetite. Investors are worried about renewed US-China tensions impacting trade talks after China on Friday demanded the US Justice Department withdraw charges that allege Chinese officials coordinated a decade-long espionage campaign to steal intellectual property and other data from dozens of companies.