Sensex ends lower at 34,001.15 pts on sustained selling across board 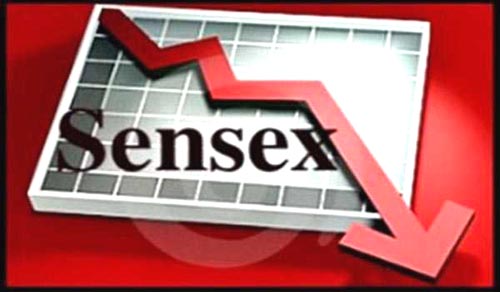 Mumbai, The benchmark index of Bombay Stock Exchange (BSE) plunged on Thursday by 759.14 points to end negative at 34,001.15 in late trade, after slumping by around 1,000 points in intra-day, on sustained selling across the board amid weaker global  cues. The Nifty of National Stock Exchange (NSE) too fell by 225.45 points to 10,234.65.The Sensex, which had gained Wednesday by 461.42 points to 34,760.89, tumbled by 697 points to 34,063.82 in the morning trade, then, it lost by 1,037 points to touch the day's low of 33,723.53 before recovering slightly to close negative at 34,001.15, sliding by 759.14 points as compared to its last close. The Nifty recorded day's high and low at 10,335.95 and 10,138.60 points, respectively.The losses in sectoral indices like IT, Metal, Realty, Technology, Finance and Oil & Gas dragged the market down, along with scrips of SBI, Tata Steel, VEDL, M&M and Infosys. The broader markets slid today, as the BSE Mid-Cap index and Small-Cap fell by 2.34 per cent and 1.41 pc, respectively. The market breadth was weaker on BSE, as 828 shares advanced against 1,761 declined and 142 were unchanged. Asian shares slumped on Thursday after Wall Street suffered its worst drubbing in eight months, prompting investors to turn their attention to Chinese trade data due Friday for a cue on whether the trade dispute is seeping through in the data. Apart from this, they'll also be keeping an eye on inflation data to be released later in the day in the United States.US stocks slumped to close sharply lower Wednesday as the Dow Jones Industrial Average sank and the S&P-500 had its worst day since February as technology stocks went into a freefall. Investors spooked by rising bond yields dumped equities in all sectors, triggering a broad market rout. The surge in bond yields made stocks look less attractive compared to bonds while also threatening to curb economic activity and  profits. The sectoral indices led by Metal, IT, Realty, Technology, Oil & Gas, Finance and Health Care fell by up to 3.77 per cent. Software giant TCS shed 2.40 pc. Major losers were State Bank of India (by 5.66 pc), Tata Steel (by 4.72 pc), Mahindra & Mahindra (by 4.67 pc), Vedanta (by 4.36 pc), Infosys (by 3.58 pc), Tata Motors (by 3.36 pc) and Adani Ports & SEZ (by 3.31 pc). Top gainers were Yes Bank (by 2.82 pc), ONGC (by 2.22 pc) and Hindustan Unilever (by 0.62 pc). In the foreign exchange market, the rupee edged higher against the US dollar, after hitting a record low of 74.50 in early deal today. The partially-convertible rupee was hovering at 74.15, compared with its previous close of 74.21.