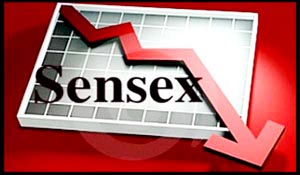 Mumbai, The benchmark index of Bombay Stock Exchange (BSE) slipped on Wednesday by 146.52 points to end volatile session on a negative note at 36,373.44 on profit-booking by local operators despite firm global cues. The Nifty of National Stock Exchange (NSE) also declined by 27.60 points to 10,980.45. In a highly volatile trade witnessed during the day, the Sensex rose by 203 points to 36,722.41 in the morning trade.It then rallied by 228 points to touch day's high of 36,747.87. The Sensex erased early gains as it fell by 199 points to hit day's low of 36,320.92 after the Opposition parties tabled a no-confidence motion against Prime Minister Narendra Modi's government. The Nifty recorded day's high and low at 11,076.20 and 10.956.30 points, respectively. The sectoral indices like Metal, Realty, Materials, Industrials and Auto dragged the market down, along with scrips of Tata Steel, VEDL, Axis Bank and Hindustan Unilever. Broader market was under pressure. Among secondary barometers, the BSE Mid-Cap index and Small-Cap fell by 1.27 per cent and 0.95 pc, respectively. Both these indices underperformed the Sensex. The market breadth was weaker on BSE, as 895 shares gained against  1,700 fell and 132 were unchanged.The sectoral indices led by Materials, Realty, Metal, Telecom, Auto and Industrials fell, declining by up to 1.89 per cent. The Sensex losers were Tata Steel (by 5 pc), Vedanta (by 3.12 pc), Axis Bank (by 2.33 pc), Hindustan Unilever (by 2.32 pc) and Tata Motors (by 2.12 pc). Cement maker Ultratech Cement shed 2.22 pc on today's announcement that its consolidated net profit fell 29.73 per cent to Rs 631 crore on 27.43 pc increase in net sales to Rs 8,841 crore in Q1 June 2018 over Q1 June 2017. Globally, European shares rose, helped by a rally in tech stocks, following well-received earning updates from equipment-maker Ericsson. Most Asian shares were trading higher, tracking overnight gains in the US market following upbeat remarks from Federal Reserve chairman Jerome Powell during his Congressional testimony.