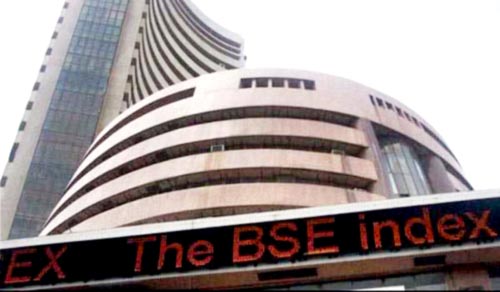 Mumbai, The BSE Sensex shed for the third straight session on Friday by 45.03 points to end volatile session on a negative note at 38,645.07 on weaker global cues after US President Donald Trump stepped up his tough talk on trade tariffs.While, the Nifty of National Stock Exchange (NSE) went up a tad by 3.70 points to 11,680.50. In a see-saw trend seen during the day, the Sensex went up by 14 points to 38,704.84 in the morning session. It then advanced by 148 points to touch day's high of 38,838.45 in intra day. Later, it pared early gains to close in red at 38,645.07, sliding by 45.03 points as compared to its last close. The Nifty registered day's high and low at 11,727.65 and 11,640.10 points, respectively.The sectoral indices like Consumer Discretionary Goods & Services, Energy, Finance, Auto, Bankex and Oil & Gas fell, along with scrips of Yes Bank, Reliance Industries, M&M and Maruti Suzuki. The broader market clocked decent gains, as the BSE Mid-Cap index and Small-Cap index rose by 0.35 per cent and 0.55 pc, respectively. Both these indices outperformed the Sensex.The market breadth was positive on BSE, as 1,427 shares gained against 1,247 fell and 180 were unchanged. Globally, European stocks fell following a downbeat session in Asia after US President Donald Trump stepped up his tough talk on trade tariffs. Asian shares declined as Wall Street ended its four-day winning streak in the last session, following a report that Mr Trump voiced his support for moving forward with more proposed tariffs.The sectoral indices led by Energy, Metal, Oil & Gas, Finance,Bankex and Auto fell by up to 1.49 per cent. While, Power, Technology, Capital Goods and Utilities rose by up to 1.28 pc.Major losers were Reliance Industries (by 2.79 pc), Mahindra & Mahindra (by 1.67 pc), Maruti Suzuki (by 1.21 pc), Tata Steel (by 1.2 pc) and Vedanta (by 1 pc). Top gaginers were Tata Motors (by 2.64 pc), Power Grid Corporation of India (by 2.40 pc), Sun Pharma (by 1.95 pc), Bajaj Auto (by 1.86 pc), IndusInd Bank (by 1.48 pc) and Infosys (by 1.47 pc). Private lender Yes Bank plunged 5.06 pc on Thursday's announcement  that it has received the Reserve Bank of India's (RBI) approval for the continuance of Rana Kapoor as managing director and CEO of the bank till further notice from the central bank. Telecom major Idea Cellular fell 0.90 pc on today's announcement that it has completed its merger with Vodafone's India unit after approval from the National Company Law Tribunal.