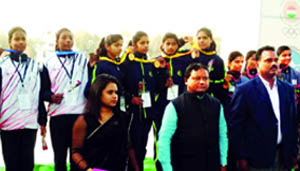 Agencies, Mumbai Countinuing its losing spree for the second straight session on Monday, the benchmark index of Bombay Stock Exchange (BSE) fell by 71.53 points to end negative at 39,122.96 on brisk sell-off in Auto, Metal, Oil & Gas, Realty, IT and Bankex counters amidst mixed cues from global peers and rise in oil prices. The Nifty of National Stock Exchange (NSE) too declined by 24.45 points to 11,699.65. Spurt in crude oil prices and concerns about delayed monsoon also affected investors' sentiment. Investors were also cautious ahead of presentation of full budget scheduled to be tabled in parliament next week. After a positive start in the morning, the Sensex swung in the range of 39,300.02 and 39,121.30 points, respectively, during the day before closing in red at 39,122.96, down by 71.53 points versus its previous close. The Nifty touched day's high and low at 11,754.00 and 11,670.20 points, respectively. The broader markets ended mixed today, as the BSE Mid-Cap shed 0.32 per cent while the Small-Cap went up 0.15 pc. The market breadth was negative on BSE, as 1,058 shares rose while 1,456 fell and 189 were unchanged. Overseas, most European shares were trading lower while Asian stocks closed on a mixed note as investors pinned their hopes on any signs of a thaw in China-US trade negotiations. Oil prices firmed up amidst worries over heightened tensions between Iran and US following last week's attack on oil tankers in Persian Gulf. MSCI's broadest index of Asia-Pacific shares outside Japan rose 0.16 per cent in early trade, while Japan's Nikkei ticked lower 0.26 pc. Wall Street stocks closed slightly lower on Friday after hitting a record high thanks to signals last week from the Federal Reserve that it would cut interest rates soon to bolster its economy from protracted trade conflicts.