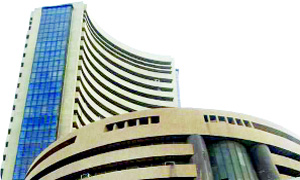 Agencies, Mumbai The benchmark index of Bombay Stock Exchange (BSE) advanced by 372.14 points or 1.14 per cent at 32,968.68 during the week ended on Wednesday, on positive global cues as trade war fears eased after reports of possible trade negotiations between the US and China. The Nifty 50 index rose by 123.25 points or 1.23 per cent at 10,121.30. Trading sentiment also boosted in the wake of the government’s announcement of lower-than-expected borrowing programme for the first half of the fiscal year 2019. As on Thursday and Friday the market remained closed for’ Mahavir Jayanti’ and ‘Good Friday’ respectively. The Sensex settled below the psychological 33,000 mark while the Nifty managed to hold above 10,000 mark. Shares were volatile during the week, ahead of the expiry of derivatives contracts and an extended holiday. Trading for the week began on positive note. On Monday, the sensex surged by 469.87 points or 1.44 per cent at 33,066.41, its highest closing level since 21 March 2018 as gains in European stocks and recovery in Asian shares boosted investors’ sentiment on easing fears of global trade wars. On Tuesday, it added another gain of 107.98 points or 0.33 per cent at 33,174.39. Snapping a positive streak of last two sessions, the Sensex dropped by 205.71 points or 0.62 per cent to settle at 32,968.68 on weak global cues. In the global market, reports suggested that China and the US have quietly started negotiating to improve US access to Chinese markets, after a week filled with harsh words from both sides over Washington’s threat to use tariffs to address trade imbalances. Talks between the US and China could prevent any escalation of the trade dispute between the two countries.The S&P BSE Mid-Cap index down by 0.53 per cent and Small-Cap too fell by 0.92 per cent.