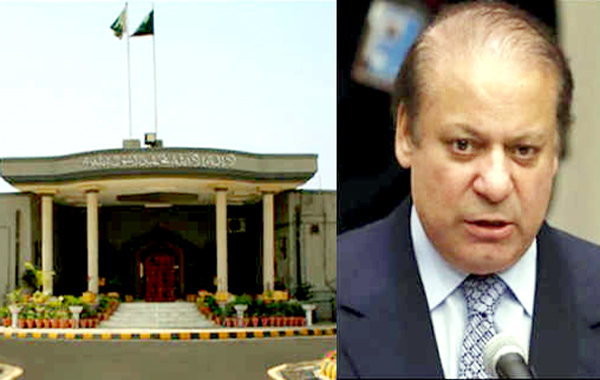 Islamabad, The Islamabad High Court (IHC) on Wednesday ordered the release from jail of former prime minister Nawaz Sharif, his daughter Maryam Nawaz and son-in-law Capt Safdar, suspending the sentences they received from an accountability court in July. The IHC suspended the 10-year sentence for Nawaz Sharif and the seven-year term given to his daughter over corrupt practices linked to his family’s ownership of upscale Avenfield flats in London, according to a report of The News International. The Sharif family had challenged the Accountability Court order which convicted them on July 06 in the corruption case.The IHC has earlier reserved the verdict after both sides concluded their arguments against the Sharif family's pleas. Following the court order, senior PML-N leader Ahsan Iqbal termed the verdict as historic and the moral victory of his party's leaders. Kh Asif thanked the Almighty and said the truth has prevailed. Judge Athar Minallah on Tuesday issued an initial order that even if the National Accountability Bureau (NAB) prosecutor does not conclude his arguments, a verdict will be announced on the pleas. A division bench of the IHC comprising Justice Athar Minallah and Justice Miangul Hassan Aurangzeb heard the petitions filed by former premier Nawaz Sharif, Maryam Nawaz and Capt (retd) Safdar. When the hearing resumed today, NAB Prosecutor, Akram Qureshi began his arguments against the pleas. After the NAB official, Nawaz Sharif's counsel Khawaja Haris took 10 mins to conclude his arguments. Yesterday, the NAB Prosecutor, while expressing reservations over the bench, said that the media is saying that Justice Athar Minallah had close ties with Nawaz Sharif and played an important part in the former premier's movement. To this, Justice Athar Minallah said: “Are your doubting my independence? That movement was regarding the supremacy of law and you can see my judgments.” He further said that in the beginning both the parties were asked that they will proceed further if they had confidence in the judges. “And now you are saying this,” Justice Athar lamented. Justice Miangul asked the NAB prosecutor to stick to his commitment. The NAB prosecutor read out a few judgments to support his arguments. Justice Athar said: “When the second Panama judgment was announced, it was binding on all judges, but the first was not declared binding.” However, the NAB prosecutor stated that the second Panama judgment is still under process. Justice Athar said all the judges signed the second Panama judgment. Justice Miangul added: “The first judgment did not disqualify Nawaz and it was issued by minority judges.” Akram Qureshi stated that “this is no ordinary case” and pertains to a “web of numerous companies”. He further said that it was not possible to investigate this case in such a short period and any observation by the court in this regard will not be appropriate. “Parents are the guardians of their children and the London flats were in children's possession,” the NAB prosecutor said. Justice Athar observed that the defence says that the JIT head Wajid Zia did not present a chart on the known sources of income. He said even the investigating officer said he does not know who prepared the chart. The NAB prosecutor argued that bogus deeds were made. To this, Justice Athar asked, “Were those bogus deeds registered there?” Qureshi said the deeds were only made to inform the brothers. “Should we announce a judgment based on criminal law on assumptions? This assumption that the property is occupied by the children but the ownership is Nawaz’s? Seemingly, the accountability court’s verdict was based on assumptions,” Justice Athar observed. Justice Miangul remarked that if Nawaz was the owner, then how was Maryam sentenced under Section 9(a)(iv). "How can there be two types of ownership at one time? Or is Maryam the rightful owner or only on paper?" he asked. Justice Athar then explained: "Justice Miangul’s question is that they both cannot be sentenced under the same indictment charges. So how then was a sentence announced on the same indictment charges?" Justice Miangul observed that the daughter should not have been sentenced under Section 5 and asked if Maryam's assets are beyond her known sources of income, to which the NAB prosecutor responded in the affirmative. The NAB prosecutor then requested the court for adjournment and said he recently underwent an open heart surgery and cannot stand for more than two hours. Justice Miangul remarked that the court will give him a chair to sit on. However, Qureshi said that sitting on chair exerts pressure on feet. At this point, Nawaz' counsel Khawaja Harris said: "We have already wasted enough time but cannot express reservations on health concerns." Justice Athar reminded the NAB prosecutor that in his last request of adjournment he said he will conclude his arguments within an hour. Qureshi said he will conclude his arguments today (Wednesday) within 30 minutes. Justice Athar then remarked: "This is an important case and it would have been great if we concluded it today. We will take a whole day for this case."