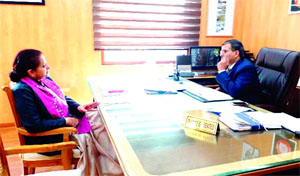 New Delhi Union Home Minister Amit Shah on Wednesday summoned Delhi Police Commissioner Amulya Patnaik and enquired about the situation in the Chandani Chowk area of the walled city where violence had erupted between two groups on Sunday night. The Delhi Police Commissioner met the Home Minister Shah in Parliament office and briefed him on the law and order situation in the area and actions taken by Delhi Police against the accused. Talking to media after meeting the Home Minister, CP Patnaik said that he has apprised the Home Minister about the situation. Around 10.30 PM on Sunday, a local fruit seller Sanjeev Gupta allegedly got into an argument with one Aas Muhammad who parked his vehicle outside his house in Hauz Kazi area in the walled city. Aas Mohammad left, but returned with more people and attacked Sanjiv Gupta’s house. Three people, including a minor, have been arrested since Sunday night over the violence which started as an altercation over parking space. Over 1000 security personnel - police and Central Reserve Police Forces — have been deployed in the area. Shops have been shut since Sunday and the locals have held a peace march. The local Member of Parliament and Union Health Minister Dr Harsh Vardhan and the BJP MP Vijay Goel visited the area on Monday and appealed people to maintain peace and harmony in the areas.