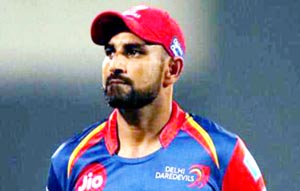 India's fast bowler Mohammed Shami is expected to depose before the investigating officials of Kolkata Police, Lalbazar, here today in connection with the domestic violence charges brought against him by spouse Hasin Jahan, official sources said. They said the 28-year-old Delhi Daredevils' cricketer stayed back in the city after playing against Kolkata Knight Riders on Monday following a summons notice. The bowler has been charged with domestic violence by his estranged wife. Sources said Md Shami, who has been cleared by the BCCI from any play related offence, is expected to appear at the police headquarters at around 1400 hours. The police are probing the charges brought by Hasin Jahan who alleged mental and physical torture by her husband. She has filed a suit against Md Shami for alimony.