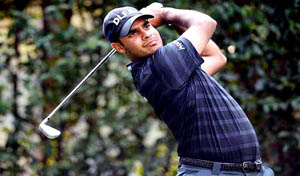 Shubhankar Sharma's hopes of winning on his PGA Tour debut were dashed by a torrid final round on Sunday but the 21-year-old Indian's performance at the WGC-Mexico Championship has made the golfing world sit up and take notice. Sharma teed off in the final group along with Phil Mickelson and Tyrrell Hatton at Club de Golf Chapultepec holding a two-shot lead and needing one more great round to become the youngest winner of a World Golf Championships event, as well as the first to win in his first WGC start. However, his lead soon vanished and a closing stretch of four bogeys in his last six holes condemned him to a three-over 74 in the final round, pushing him down to a tie for ninth on 274. "A little bit disappointed, I was leading and I think I couldn't finish it off today," said Sharma. "But that's what the game is about. And what I learned, especially playing with Phil, I'll cherish it forever." Sharma was six when he went to a golf course for the first time and got hooked on the sport. His father quit the Indian army to help his son chase his golfing goals.He has already tasted victory this season with European Tour victories in South Africa and Malaysia and his Joburg Open win earned him a ticket to this year's British Open at Carnoustie. Sharma, who lives in Chandigarh though his family hails from the northern Indian state of Jammu and Kashmir, is the country's highest-ranked golfer at No. 66. A top 50 spot is needed to punch his ticket to next month's U.S. Masters but the tournament has in the past invited a non-exempt Asian player, raising the possibility that Sharma might make Augusta National without qualifying automatically. TALENTED PLAYER Five-times major champion Mickelson, who defeated Justin Thomas on the first playoff hole to win the event, had mistaken Sharma for a member of the media on Saturday but will no doubt be able to put a name to the face in future. "I saw how well he struck the golf ball. He hit a beautiful tee shot on one, you can tell he can really play," Mickelson said. "I saw some of the putts, some of the highlights with the putter. I know he's a very talented player and I believe he's leading the Order of Merit on the European Tour, so I know what a great player Mr. Sharma is. I probably shouldn't say that, he's 26 years younger than me!" With his two European Tour victories, Sharma seems poised for a breakout year and compatriot Arjun Atwal said he has the mental game to match his golf skills. "To me, he has a very calm attitude. He doesn't get flustered, he takes everything in his stride and that's what I've always noticed about him," said the first Indian winner on the PGA Tour."He's been very level headed since I've known him. I can't see him being upset or cussing. It's amazing to see what he's doing at the age of 21. "Shubhankar has got the type of game that you can't pinpoint what he needs to improve or get better. There's nothing that he's very exceptional at, but the thing is that every part of his game he's very good at doing. "He's like a Steve Stricker or Jim Furyk. When you play with these guys, they don't do anything exceptional, like wow, but everything that they have in their game is good. There's nothing bad at all."