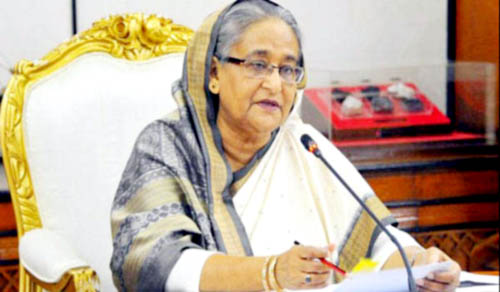 Dhaka, Awami league President Sheikh Hasina was on Monday sworn in as the Prime Minister of Bangladesh for a third consecutive term along with her 46 members of her cabinet following the December 30 national elections in which her party won a landslide victory. President M Abdul Hamid administered the oath of office and secrecy to Hasina and the new cabinet members at the Darbar Hall of Bangabhaban this afternoon.Over 20 new faces have been inducted into the council of ministers. AK Abdul Momen has been appointed Foreign Affairs Minister. Thousands of people from all walks of life thronged the Rajuk Avenue and Bangabandhu Avenue intersection to have a glimpse of her when she was on her way back home from Bangabhaban after the the swearing-in ceremony.