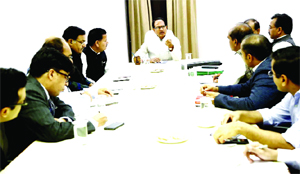 Chronicle Reporter, Bhopal During a review of the losses to crops in the recent hailstorm, Chief Minister Shivraj Singh Chouhan directed to estimate the loss with complete transparency. Chouhan said that field teams of agriculture and panchayat department besides revenue department, panchs, sarpanchs and other public representatives should also be included in the survey team so that farmers do not have any complaint with the estimation. CM Chouhan said that the survey report of the estimate of loss of crops should be pasted on walls of panchayat bhavans and other public places. Objections received should be redressed immediately and amendments should be made in the report. Chouhan said that affected farmers should be compensated under any circumstances. It was told at the meeting that there have been changes in the initial figures of loss to crops. The number of affected villages has now grown from 621 to 984. Public Works Minister Rampal Singh, Chief Secretary BP Singh, Additional Chief Secretary Finance AP Shrivastava, Commissioner Agriculture Production PC Meena, Principal Secretary Agriculture Rajesh Rajoura, Principal Secretary Revenue Arun Pandey, Principal Secretaries to the Chief Minister Ashok Barnawal and SK Mishra, Secretary to the Chief Minister Vivek Agrawal and senior officers were present at the meeting.