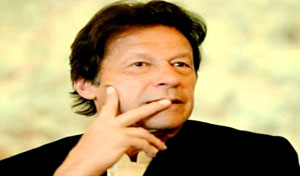 Islamabad, A shoe was hurled at Pakistan Tehreek-i-Insaf (PTI) chief Imran Khan during a rally in Gujarat in Pakistan's Punjab province. The shoe missed its intended target and landed on PTI leader Aleem Khan’s chest on Tuesday, a report published in Pakistan daily Dawn said. The incident occurred when the PTI chief was addressing the crowd atop a vehicle. It is third such attack in last week. On Sunday, a shoe was hurled at former Prime Minister Nawaz Sharif at Jamia Naeemia, Lahore. On Saturday, Pakistan Foreign Minister Khwaja Asif's face was blackened with ink during a PML-N workers convention in Sialkot. A man was arrested after the incident.