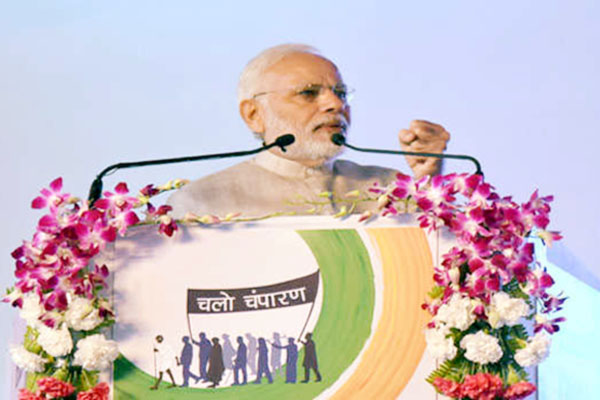 Motihari, Amid reports of violence on religious lines from some corners, Prime Minister Narendra Modi today called upon the people to dedicate themselves for creating a society, free from communal tension, having strong awareness for cleanliness and spirit of mutual co-existence like a united family. Mr Modi, while addressing a large number of "Swachhagrahis" gathered here from various parts of the country to attend a function, to mark the end of year long centenary celebrations of 'Champaran Satyagrah movement', exhorted the people to strive for creating a society, free from any trace of communal tension. "We should make sustained efforts to create a society having strong awareness for cleanliness and spirit of living together like a united family", Prime Minister said adding that the nation could pay real tributes to freedom fighters who dedicated their lives for a greater cause, only if a sense of cleanliness reached every household of the country by October 2, 2019, the 150th birth anniversary of Mahatma Gandhi. Mr Modi said that the Centre was working hard with an ideology of taking together all sections of the society on path of development and prosperity. There was no difference in ideology of the central government and Nitish Kumar government in Bihar as both were working in tandem for interest of the common man, he remarked.