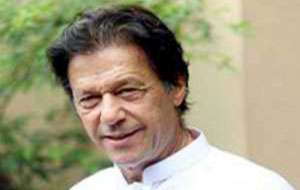 Islamabad, Even as there is huge controversy over Punjab Minister Navjot Singh Sidhu's Pakistan visit, his fellow cricketer-turned new Prime Minister Imran Khan on Tuesday described the Congress politician as an 'ambassador of peace' and said both the countries must adopt dialogues to resolve all conflicts, including Kashmir. 'I want to thank Sidhu for coming to Pakistan for my oath taking. He was an ambassador of peace & was given amazing love & affection by people of Pakistan,' Mr Khan said in a series of tweets. He further said, 'To move forward Pakistan and India must dialogue and resolve their conflicts incl Kashmir: The best way to alleviate poverty and uplift the people of the subcontinent is to resolve our differences through dialogue and start trading.' The new Pakistan Prime Minister also made a veiled attack on the BJP for its continuous onslaught on Sidhu for his visit and conduct at the swearing-in ceremony and said,' Those in India who targeted him are doing a great disservice to peace in the subcontinent - without peace our people cannot progress.' Meanwhile in Delhi, the BJP stepped up attack on Mr Sidhu for his Pakistan visit and subsequent statement in the media saying while the Congress politician has been stating that his visit was personal but 'the gloves and the kit he was using are Pakistani'.