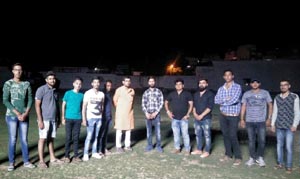 Chronicle Reporter, Bhopal The Sindhi Premier League (SPL) Night Cricket Tournament will be held at Babe Ali Cricket Grounds from 5 pm every day from Sunday. Sindhu Sena president Rakesh Kukreja informed that this is the fifth successful year of SPL. A total of 32 teams of Madhya Pradesh will take part in the Tournament. The first prize is Rs 51000 and trophy and the second prize is Rs 21000 and trophy. Besides best bowler, best batsman and best fielder trophies would be given away. On the occasion of inauguration of Tournament, National Anthem will be played. Besides rock band, colourful firework and screening of IPL final match on large screen will mark the inaugural ceremony. Separate arrangements have been made for the seating of families, woman and children. Food stall, DJ, selfie point and gift to spectators on behalf of Miraj on holding the catch outside the boundary line. Attractive gifts would be given to the spectators every day through lucky draw. Attractive gifts would also be given to the children for making paintings on cricket. Sindhu Sena’s Sumit Ahuja, Darshan Kukraja, Anil Tharvani, Rahul Talreja, Vikas Wadhwani, Rajesh Soni, Manish Meghani, Nareh Golani, Ravi Bajaj, Kamal Rajani, Dharmendra Anandani, Yashpal Tanwani, Rakesh Bharani, Manish Ramchandani, Amit Advani, Sanjay Madhhvani, Rakesh Kriplani and others have appealed to the people to enjoy the Tournament in maximum number.