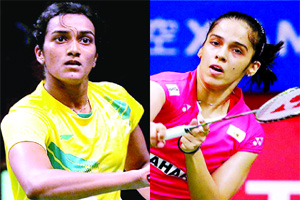 Agencies, New Delhi After narrowly missing out on a spot at the semi-finals of the Asian Badminton Team Championships last year, the Badminton Association of India (BAI) have fielded a formidable line up for this year’s edition in Malaysia which will start from February 6. The team will include the likes of 2016 Olympic silver medalist PV Sindhu, 2012 London Olympic bronze medalist Saina Nehwal, World No. 3 Kidambi Srikanth and World No. 10 HS Prannoy, among others. Leading India’s charge in the men’s singles category will be Srikanth who will have a strong back up from H.S Prannoy, Sai Praneeth and Sameer Verma. In the women’s singles category, P.V Sindhu will take the baton in her hands along with Saina Nehwal and Krishna Priya and Ruthvika Gaade. While the doubles contingent will include the prodigious pairing of Satwik Sairaj/Chirag Shetty, World No. 32 Manu Attri/Sumeeth Reddy and Shlok Ramachandran/M.R Arjun, Ashwini Ponappa/Sikki Reddy will be handed the mantle in the women’s doubles section and will be backed up by Prajakta Sawant/ Sanyogita and Rituparna Das/Mithila U K. In Vietnam last year, the Indian contingent started off on a winning note as they thumped Singapore 4-1. The only loss of the tie came where the mixed doubles pair of Sikki Reddy/Pranaav Jerry Chopra lost out in straight sets. However, the Indians faced a powerful Korean team in their next group stage encounter and went down 1-4 to the eventual runners-up of the championship. Nonetheless, with a win in the group stages against Singapore, they managed to make their way into the knockout phase where they couldn’t overcome Thailand in a close-fought encounter and lost 2-3. “After a very successful 2017 for Indian badminton on the world circuit, we want to start off 2018 by displaying our dominance in the Asian Badminton Team Championships”, the General Secretary, BAI, Anup Narang stated.