Sisodia meets Dalai Lama , thanks him for agreeing to launch ‘Happiness Curriculum’ 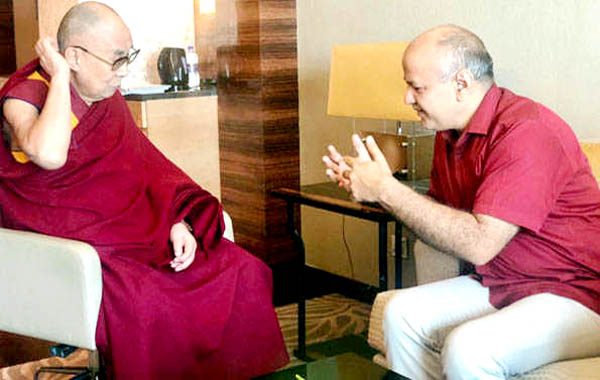 New Delhi, Delhi Deputy Chief Minister Manish Sisodia on Saturday met His Holiness the Dalai lama and expressed his gratitude to him for accepting invitation to launch the 'Happiness Curriculum' in Delhi Government schools on July 2. After meeting the Tibetian spiritual leader this morning, Mr Sisodia, in a series of tweets, said, “Had the honour of meeting His Holiness the Dalai Lama today. Went to thank him for accepting our invitation to launch the 'Happiness Curriculum' in Delhi Govt Schools.” The Minister said that he shared with him all the work that the AAP Government has done in developing the 'Happiness Curriculum', and how it can have a transformative impact on the society. “His Holiness the Dalai Lama shared that he felt that teacher training was at the heart of our Education system and was happy to know of our initiative,” he said. The Dalai Lama said that problems in the world are because human beings are not able to deal with their emotions. 'Education not only needs to have modern knowledge, but also impart children an ability to deal with their emotions,' Mr Sisodia stated. On June 20, the AAP government had announced to launch ‘’Happiness Curriculum ‘’ for Nursery to Class 8 students in all government run schools.In this curriculum meditation and mental exercises have also been included.