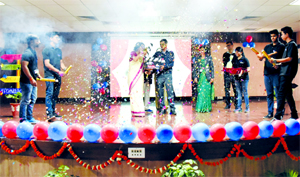 Chronicle Reporter, Bhopal Sagar Institute of Science and Technology (SISTec) is amongst the best engineering colleges of Bhopal is known for integration of engineering, management and pharmacy streams with the industry. The two days unique Bonnaru Film Festival began at SISTec campus with great fervor and enthusiasm. SISTec Bonnaru Film Festival commenced by seeking blessings of ‘Maa Saraswati’ and lighting of ceremonial lamp followed by Mahurat Shot by esteemed guest Pawan Grover, Executive Director, Sagar Group of Institutions, Principal SISTec, Dr Pallavee Bhatnagar, Principal Sagar Public School, Gandhi Nagar, Dr Jaishree Kanwar, Vice Principal Dr Swati Saxena along with Dr Abhishek Tripathi , HOD, SISTec MBA. Governing members of SISTec, Principals of other Institutions, distinguished guests, faculty member’s staff and 800+ students were also present on the occasion. The festival began with a video Introduction of cinema depicting its role and impact on society. It also provided an insight on the contribution made by Indian Cinema towards the society especially on the lives of youth. Speaking on the occasion, Dr Pallavee Bhatnagar said that, “Cinema and short films create a great impact on our lives. It triggers our creativity by activating our subconscious mind. It is one of the easiest, modern, attractive, entertaining and cost effective means to communicate powerfully to the youth of India. I congratulated the faculties of SISTec for having identified such an amazing opportunity to educate, inform and guide the students.” A colorful, traditional and spectacular dance performance marked the opening celebration followed by screening of short film ‘Azaad.’ Dr Abhishek Tripathi, HOD, SISTec MBA detailed the description of events with Day 1 SISTec Bonnaru Film Festival witnessing - Pampelona: A filmy debate competition on topic Salman Khan Vs Amir Khan; Candid: creating movie by pictures in which students had to create and narrate a story; Coashella La Revue: Movie Screening with an on spot review competition with students as its participants; Technoloxia : expert session on Film Technology. Harshal Geete, IV Semester student of SISTec – computer science branch was part of audience said that, “This is a great way to inspire us and develop our mindset. From the festival, we learnt the use of technology in films and my take away from screening is until you take a step and move forward, you will never know what you want to achieve”. Sudhir Kumar Agrawal, Chairman, Sagar Group, said that “Our institutions are the nucleus of our energy. We will continue to modernize and impart education to create opportunities for the students to build the nation. SISTec Bonnaru Film Festival is another step in this direction.”