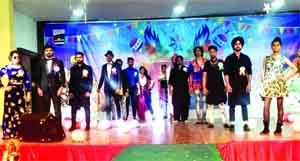 Chronicle Reporter, Bhopal Sagar Institute of Science and Technology (SISTec) Gandhi Nagar and Ratibad campus concluded its three day Annual Techno Cultural Management Fest with a spectacular and colourful fashion show and award ceremony to winners of various competitions. On the culminating day of Sagar Fiesta2K18 at SISTec’s Gandhi Nagar campus students witnessed and participated in events of Ninad (Solo Singing); Artifact (Painting without brush); Dance Pe Chance (Footloose) and Ojas (Group Dance) competitions displaying their talent and creativity. Sagar Euphoria and Shine 2k18 at SISTec’s Ratibad campus witnessed participation from students in events of Junk Yard, Web Designing, Embeded Circuits, Cadiography and Circuit Mania for all streams of engineering branches. It also witnessed Khulasa (Treasure Hunt), Student of the Year Contest, Q4U, Controversial Panel Discussions and Debate Competition. Yesterday evening students at Sagar Euphoria and Shine 2k18 enjoyed and danced to the beats of live performance of Purple Studio which spread the magic of music. In all, 1400+ students participated in the fest along with teams from other colleges. Sagar Fiesta2K18 and Sagar Euphoria and Shine 2k18 concluded with displaying of a spectacular and colourful fashion shows – ‘Vionnet’ and ‘Glimmer & Gloss’. The beautiful and eye-catching colours of creativity were seen on the attire presented by the students. The students showcased their wondrous creativity on dress materials as they presented their creations with social messaging to save the environment. Later, the students showcased their creativity on the ramp which they had created for the show. Students displayed designs which are light, soothing and close to nature. Some defined the seasons and some described the beauty of mystic design adorned with various vibrant colours. The atmosphere of the fashion show became more pleasing as more and more soothing colors got presented on the ramp. The fashion show was presented in various segments and rounds in which audiences and the judges were able to explore a new form of creativity. Amongst the popular rounds which got applauded were States of India, Group and Couple rounds in which the students presented the splendor worn in different states. Traditional, ethnic, draping, elegant and classy styles with most attracted bridal wear rounds glued everyone to their seats. The positive vibes at the centre stage by their performances portrayed a world of human emotions with social messaging was much appreciated by the judges and the faculty members as the models walked over the ramp with much grace and confidence. Sudhir Kumar Agrawal, Chairman, Sagar Group, said that “Congratulations to entire team of SISTec for a successful execution of Annual Techno Cultural Management Fest. We are confident that our fests have provided the opportunity and exposure to our students of various cultures to develop socially, technically and competitively.”