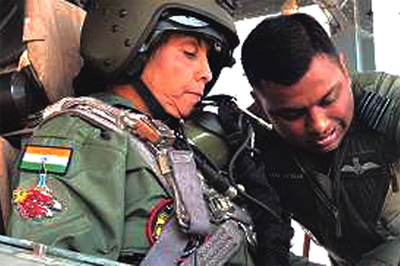 Agencies, Jodhpur Defence Minister Nirmala Sitharaman on Wednesday flew Sukhoi-30 fighter jet, days after taking stock of aircraft carrier INS Vikramaditya’s capability. According to sources in the Air Force, Ms Sitharaman flew the fighter aircraft from Jodhpur Air Force Station. At the time of flying, she was also wearing a G-suit, worn by the pilot. Ms Sitharaman, after the sortie, said, “Very proud & thankful that I’ve gone through this experience because it actually tells me with what rigor, practice, what level of readiness & how quickly they (defence personnel) have to respond to situations. It was eye-opening & memorable.” Prior to the flight, the pilot apprised the Minister in the cockpit about the Sukhoi’s operating systems. Ms Sitharaman is the country’s first woman Defence Minister to fly into a combat aircraft. This flight of the Defence Minister is part of the plans for reviewing the military operation preparations and combat capability of the three forces. Since assuming office as the country’s first full Defence Minister, Ms Sitharaman has been taking stock of the preparations and needs of the three forces.