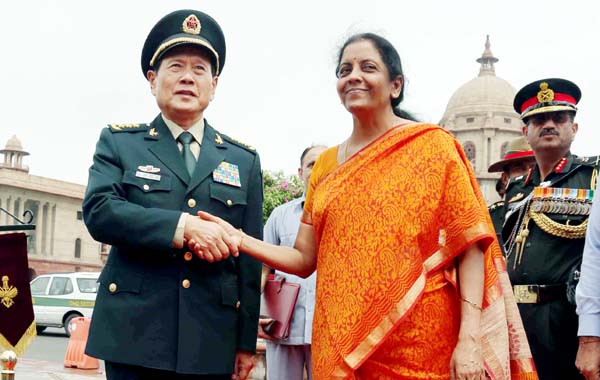 New Delhi, India and China on Thursday pledged to strengthen defence cooperation and strategic ties.This was underlined at the delegation level talks held here.The Indian side was led by Defence Minister Nirmala Sitharaman, while her Chinese counterpart General Wei Fenghe led the Chinese side. "The meeting emphasized on strengthening Indo-China defence cooperation and strategic ties," a tweet from the Defence Minister said. Gen Wei is the first Chinese Defence Minister to visit India in six years. It is also the highest-level visit by a Chinese military official since the border standoff at Doklam in 2017. During the just concluded Monsoon session of Parliament, External Affairs Minister Sushma Swaraj had told the Lok Sabha that the 73-day Doklam stand-off was resolved by 'diplomatic maturity' by both sides. Gen Wei, who is on a four-day visit, met Prime Minister Narendra Modi here on Tuesday.The two sides could have parleys on the issue of Line of Actual Control. Both the countries have differences over the Line of Actual Control and overlapping claims on areas along the 3,488 km-long LAC. "Terming India-China relations as a factor of stability in the world, Prime Minister Modi said that maintenance of peace and tranquility in the border areas is indicative of the sensitivity and maturity with which India and China handle their differences, not allowing them to become disputes," a statement from PMO said on Tuesday after the visiting Chinese minister called on Mr Modi. Chinese media also has favoured the renewed interactions at the top level.During his meeting with the Chinese Defence Minister, Prime Minister Modi also has warmly recalled his recent meetings with President Xi in Qingdao and Johannesburg besides the Wuhan informal Summit.