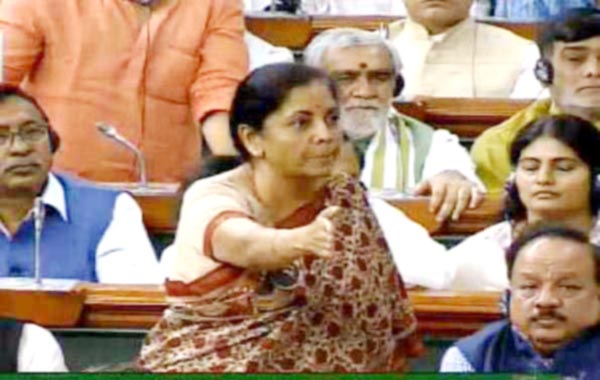 New Delhi, Defence Minister Nirmala Sitharaman on Friday defended her earlier statement that there was some secrecy about the Rafale deal between India and France. Making a brief intervention in the Lok Sabha during the No-Trust motion, the minister rubbished Congress president Rahul Gandhi's allegation that she had told untruth in the past on the matter. Displaying papers, Ms Sitharaman said,' The French President in an interview to an Indian media house said if you have this commercial agreement and obviously you have competitors and we can't let them know the details of the deal...and (therefore) what he has said to the the honourable member is immaterial here.' During the high-decibel debate earlier, Mr Gandhi lashed out at the BJP led government and especially singled out Prime Minister Narendra Modi and said his (Rahul) observation on Rafale fighter jet deal has almost silenced Mr Modi and 'he cannot see eye to eye with me'. Mr Gandhi's participation in the debate was marred by regular noisy protests from the treasury bench including Ms Sitharaman and several of her colleagues like Giriraj Singh and Babul Supriyo. The Congress president also had charged that Ms Sitharaman had earlier misled the country by stating that the details of the deal with French government could not be shared because it was part of a secret pact. Mr Gandhi claimed that he had met French President Emmanuel Macron in Delhi and the latter had told him that there was no secrecy about the deal.