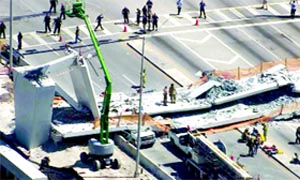 Agencies, Miami Six to 10 people were killed when a newly erected pedestrian bridge spanning several lanes of traffic collapsed at Florida International University on Thursday, U.S. Senator Bill Nelson of Florida told TV station CBS Miami. Emergency personnel with sniffer dogs searched for signs of life amid the wreckage of concrete and twisted metal that rained from the collapsed structure and crushed vehicles on one of the busiest roads in South Florida. At least eight vehicles were trapped in the wreckage of the 950-ton bridge and at least 10 people have been transported to hospitals, officials and doctors told news conferences. Witnesses told local media the vehicles were stopped at a traffic light when the bridge collapsed, and authorities said there still may be more vehicles trapped underneath. “We’re working our way into the pile trying to create holes that we can actually physically see,” Miami-Dade Fire Department Division Chief Paul Estopian told reporters.The Florida Highway Patrol has said several people were killed but did not release a figure on fatalities. At one point, police requested television helicopters to leave the area so rescuers could hear for any sounds of people crying for help from beneath the collapsed structure, CBS Miami television said. Complicating the rescue effort was the uncertainty about the integrity of the bridge, parts of which remained off the ground, much of it inclined, local media reported. The 174-feet (53-meter) long bridge connects the university with the city of Sweetwater and was installed on Saturday in six hours over the eight-lane highway, according to a story that was posted on the university’s website. The bridge was intended to provide a walkway over the busy street where an 18-year-old female FIU student from San Diego was killed while trying to cross last August, according to local media reports. Students at FIU are currently on their spring break vacation, which runs from March 12 to March 17. ‘A MIRACLE’ Student Aura Martinez was having lunch in a nearby restaurant with her mother when a waitress told her the bridge had collapsed. She ran outside and helped pull a woman out her car, most of which was flattened by the bridge. “Her car, it was literally a miracle of God, her car got squished by the bridge from the back, so she was able to get out and she was on the floor and it was just very traumatic,” she told the local CBS affiliate.