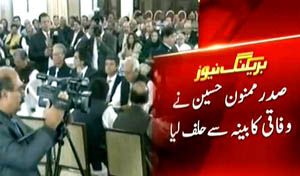 Islamabad, The 16-member federal cabinet announced by Prime Minister Imran Khan was sworn in at a ceremony held at the President House, Islamabad on Monday. As per details garnered, President Mamnoon Hussain administered the oath to the newly inducted members of the cabinet, who will assist the prime minister, in managing the country, said a Dunya News report. The ceremony begun with the national anthem and was followed by recitation of verses from the Holy Quran. It was attended by the prime minister, along with other dignitaries. On Aug 19, Pakistan Tehreek-e-Insaf (PTI) spokesperson Fawad Chaudhry on popular micro-blogging website Twitter stated that premier has approved a 21-member cabinet comprising 16 ministers and five advisers. In first phase, names of 15 ministers were announced. Later, PM Imran Khan also added Khusro Bakhtiar as minister of water resources.