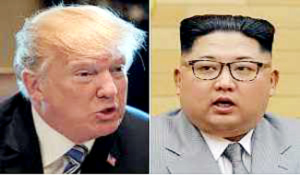 Washington, Former US Secretary of Defense William Cohen has said he was skeptical about a planned meeting between President Donald Trump and North Korean leader Kim Jong Un, according to a CNBC report on Monday. He said he had reservations about whether North Korea would actually get rid of all its nuclear weapons.The positions of John Bolton, Trump's pick to replace HR McMaster as national security adviser, were some cause for concern, Cohen added. There are good reasons to be skeptical about a bilateral meeting that's supposed to take place between the US and North Korea, Cohen said. US President Donald Trump made the surprise decision earlier this month to accept an invitation to meet with North Korean leader Kim Jong Un by May, although specific details of that meeting have yet to be announced. Cohen, who led the Defence Department under the Bill Clinton White House, maintained that he had reservations about the North Korea talks based on his personal experience. "In my own experience in dealing with the North Koreans, there's never been a discussion that they will denuclearise ... I don't believe that they're committed to doing that now," Cohen, currently the chairman and CEO of consultancy The Cohen Group, said Sunday at the China Development Forum in Beijing. While North Korea appeared willing to sit down with the US to talk, according to Cohen, it was worth noting that the hermit nation had also never complied with prior agreements. "I'm skeptical that they would really get rid of all their nuclear weapons," he said. Cohen last year warned that North Korea was the "most dangerous issue" facing the world, a claim he said was still true today. Other analysts and experts have cautioned that it was important to manage expectations around the meeting. Following the Trump administration's "maximum pressure" policy on North Korea, the agreement to meet with Kim could potentially erode the effectiveness of sanctions, some indicated. Another factor in the mix has been Trump's pick to replace HR McMaster as national security adviser: John Bolton, a former US ambassador to the United Nations. Bolton, who is regarded as a foreign policy super-hawk, had previously argued for preemptive strikes against North Korea. Although it's too early to tell how Bolton will influence policy, Cohen highlighted that rhetoric was an important consideration going forward. "I think there's reason for concern, in terms of Mr Bolton, in terms of his positions, because he is much more aggressive in terms of the use of force ... So I think we have to be careful of our language, that the rhetoric doesn't get ahead of the policy," Cohen said.