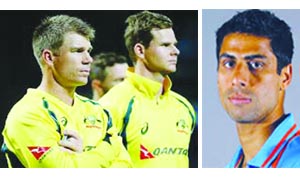 New Delhi, Former India speedster Ashish Nehra believes Steve Smith and David Warner should participate in the Indian Premier League (IPL) and hailed the Australian skipper Smith for accepting his team's mistake. Speaking on the sidelines of the IPL franchise Royal Challengers Bangalore (RCB) association with tech giants HP for the upcoming season of the league, Nehra said,"If Smith has done something wrong, the ICC will take care of such things which they have already done, by penalising him." "But credit goes to Smith for admitting to his team's mistakes. Let bygones be bygones, both Smith and Warner are assets not only for Australia but also to their respective IPL teams," added he. On being queried whether the franchises should reconsider their decision of continuing with the two Aussies after the controversy, RCB bowling coach said,"It will be very sad if any IPL team fails to get their services. Whether they are retained as captains of their respective IPL teams, it's for the franchises to decide, but it will be a big loss to both Rajasthan (Royals) and Sunrisers (Hyderabad) if they lose players of such calibre." "I don't think they deserve such harsh punishments, whatever happened lets forget and move forward instead. He (Smith) has admitted his mistake and also stepped down as captain of his national team. You can't expect anything more than that," added Nehra. Significantly, Smith was handed a one-match suspension beside being fined 100 per cent of his match fee following the ball-tampering incident during the third Test against South Africa at Newlands. "These kinds of incidents have happened even in the past. Australians always like playing the hard way across generations, but crossing the line isn't a fair thing," added the 38-year-old.