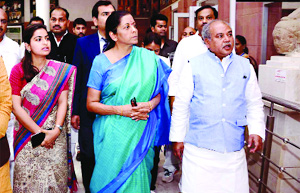 Chronicle Reporter, Bhopal Defence Minister Smt. Nirmala Sitharaman visited Ramprasad Bismil Museum situated in Morena on Monday. On this occasion, Defence Minister paid floral tribute at the statue of martyr Ramprasad Bismil, established in the museum. In the main building of the museum, hoisting of the tri-colour has been displayed to mark the victory in Kargil war. Apart from this, animals and creatures and life style of ancient time have been displayed through photography. Pictures of different historical temples of Morena district have been displayed in the museum. A list of martyr Army jawans, photographs of Army personnel of Chambal division, who were awarded the presidential medals, gallantry medial and other medals, have been displayed in the museum. Heritage of Chambal has been preserved in the museum constructed in the memory of martyr Ramprasad Bismal, in which, historical, tourism places, industries of the district, medicinal plants and their importance have been displayed through pictures. Defence Minister Smt Sitharaman was presented memento related with our heritage by Ashok Sharma of Archeology Department. Bahan Krishna and Manisha Rathi of Omshanti Ashram also presented memento to the defence minister. Union minister for Rural Development and Panchayati Raj and Mining, Narendra Singh Tomar and Chief Minister Shivraj Singh Chouhan were present on the occasion.