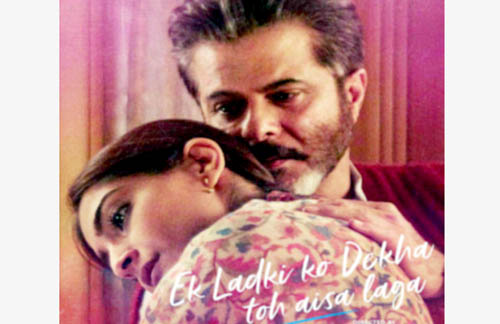 New Delhi, Bollywood actress Sonam Kapoor, her mother Sunita Kapoor and her cousin and actor Arjun Kapoor have greeted Anil Kapoor on his birthday on Monday. In a post on social media, Sonam Kapoor Ahuja shared a behind-the-scenes photo from her upcoming film ‘Ek Ladki Ko Dekha Toh Aisa Laga’ to wish her father. "Happy happy birthday dad... this has been a momentous year for both of us. For the first time in 10 years of being in this industry I shared a frame with you and was your co-star... And you also had to see me get married,"said Sonam, who co-stars with Anil Kapoor for the first time in the upcoming film, in a message on social media. "All this was a complete roller coaster... hard and beautiful at the same time... I'm thankful for the teachings of love, progressive ideals and morals that have been a part of my upbringing, and each year I realise more and more what a gift that is in this day and age... love you so much," Sonam wrote in her message. The film will see the duo translate their real life father-daughter bond on screen as well. Sonam’s cousin and Anil’s nephew Arjun Kapoor also greeted him on this occasion. ‘’The maddest man child who’s 26 going on 62 !!! Janamdin Mubarakan !!! It’s been a privilege to be ur nephew & an honour being ur co star... @AnilKapoor #whataplaya #chaiwaala #slumdogmillionaire #jhakaas #agelesswonder,’’Arjun said in a message on social media .