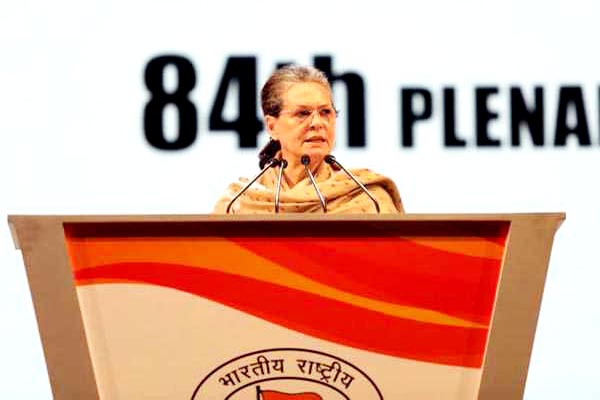 New Delhi, Chairperson of Congress Parliamentary Party Sonia Gandhi on Saturday charged the Modi government with using all forces and means to embarass the grand old party and said her party will never bow down before such authoritarian regime. Addressing party workers at the plenary session, she said,'The Congress party has never bowed down in the past and never do so in future also.' She said the Congress party will never compromise with its principles against those who are 'displaying arrogance of power' and will continue to expose various failures and wrongdoings of BJP-led government. Without referring to the ensuing assembly elections in Karnataka, she however, underlined the importance of it and said 'Forty years back Indira's Ji's stunning victory in Chikmagalur turned around Indian politics, once again our party must give a similar performance.' Ms Gandhi accused the BJP government of showing disregard to constitutional propriety and undermining the importance of Parliament and said the central government was slapping false cases against opposition leaders.'We will continue to expose the government and its corruption with evidences,' she said.