Sorry to crush your dreams of seeing ‘A Star is Born’ co-stars Lady Gaga and Bradley Cooper as a real-life couple! Looks like, Gaga is moving on after parting ways with ex-fiance Christian Carino, but not with Cooper. Rather, the ‘Shallow singer is s 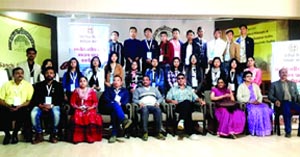 Sorry to crush your dreams of seeing ‘A Star is Born’ co-stars Lady Gaga and Bradley Cooper as a real-life couple! Looks like, Gaga is moving on after parting ways with ex-fiance Christian Carino, but not with Cooper. Rather, the ‘Shallow singer is sparking romance rumours with sound engineer Dan Horton. The duo was seen locking lips over the weekend while enjoying brunch at Granville restaurant in Studio City, California, reported agency. Multiple onlookers told the outlet that Gaga and Horton appeared to be more than friends and the two were seen smooching several times while dining. In one of the photos, Gaga was seen standing and bending over to kiss Horton as he sat at their table at the L.A. hot spot. A fellow diner said the singer, who “looked amazing” in black cut-off shorts, a black bodysuit, and boots, remained low-key at the eatery and also turned down photos with fans, who approached her as she and Horton left. “She seemed confident and in a good place,” added the diner. Another source said that the duo dined for about an hour and was involved in a deep conversation. “They were kissing as they spoke really close up,” said the source, who added that Gaga and Horton popped by Lemonade to pick up a couple of beverages before heading back to Granville. “Ironically, she had a table in the front near the sidewalk, so she was clearly okay with being seen. She seemed very happy when interacting with the guy she was with,” added the diner. Although the two were spotted kissing at Granville, another source who spotted the couple at Lemonade said that the two were busy chatting but refrained from showing PDA as they ordered drinks at the cafeteria. Horton has worked as a monitor engineer for the singer since November 2018. He has been working with Gaga since she started her Las Vegas residency. The sound engineer has previously also worked with other big-names like Camila Cabello, Bruno Mars, and Justin Timberlake. Horton was previously married to actor Autumn Guzzardi, who is currently starring in the off-Broadway musical ‘Rock of Ages’. The two tied the knot in 2013. On the other hand, Gaga was earlier engaged to Carino, the two called it quits shortly before the Grammy Awards in February, this year. “It just didn’t work out. Relationships sometimes end. There’s no long dramatic story,” a source said at that time. Gaga was linked to Cooper after their intimate Oscars performance of ‘Shallow’ in February and their undeniable chemistry in the critically acclaimed film ‘A Star is Born’. The Gaga-Cooper romance rumours only intensified when the 44-year-old actor split from his girlfriend Irina Shayk in June. Shayk and Cooper share a 2-year-old daughter named Lea De Seine Shayk Cooper. However, Gaga shut down the romance rumours on ‘Jimmy Kimmel Live’. “No,” she proclaimed when host Jimmy Kimmel jokingly asked if she was having an affair with Cooper.