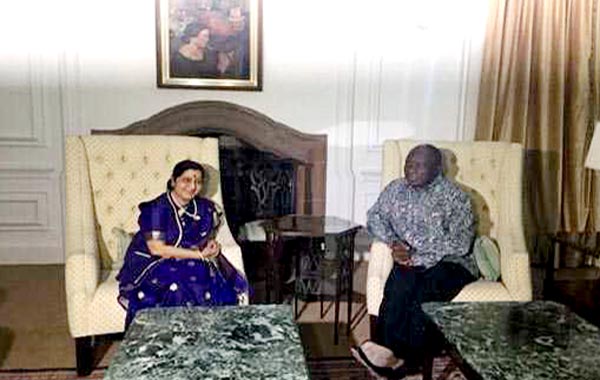 Johannesburg, South Africa on Monday committed to take bilateral ties to a newer height with India. External Affairs Minister Sushma Swaraj is visiting South Africa to attend the BRICS Foreign Ministers meeting in Pretoria as well as to chair a meeting of IBSA Foreign Ministers on the sidelines. She will also be visiting Durban to commemorate the 125th anniversary of the Pietermaritzburg incident which acted as a catalyst for Mahatma Gandhi to practise satyagraha against injustice and colonialism. External Affairs Minister who landed in Johannesburg on Sunday was received by South Africa Minister of International Relations and Cooperation Luwellyn Landers. Last evening, Ms Swaraj called on President of South Africa Cyril Ramaphosa. Welcoming her to South Africa, the President recalled his meeting with Prime Minister Narendra Modi at the Commonwealth Summit and conveyed his commitment to take the bilateral relations with India to the next level. Ms Swaraj mentioned that the year 2018 was of special significance for both India and South Africa since “we were commemorating the 25th anniversary of diplomatic relations between the two countries, 100th birth anniversary of the iconic leader Nelson Mandela and the 125th anniversary of the Pietermaritzburg incident of Mahatma Gandhi.” The enhanced engagement between the two countries, especially in the aftermath of the India-South Africa Business Summit, and greater cooperation in areas such as skill development, agriculture, IT etc were also discussed, according to a statement by the external affairs ministry. President Ramaphosa recalled the great legacy left behind by Mahatma Gandhi in South Africa for future generations.